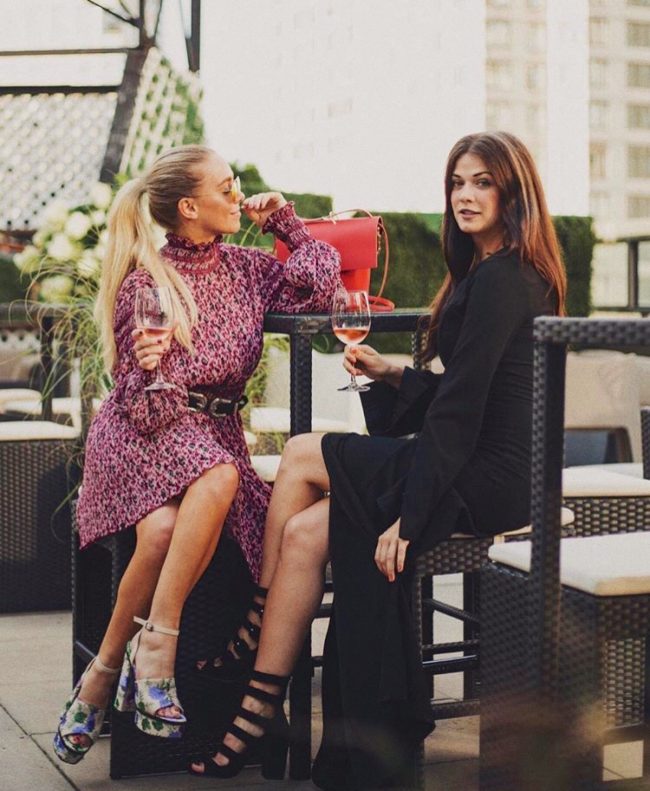 Alright so we are here to really break down this whole loop giveaway situation – as in our opinion – it’s gotten a little out of hand. So to give any newbies out there some background, back in Jan. 2015 loop giveaways used to be honest contests where bloggers partnered together to give back to their following, while gaining real and authentic followers. We remember vividly when they came on the scene and partnering with Amanda of East Coast Fox on one. We all venmo’d Amanda $20 and Amanda went to the mall, bought a $200 Anthropologie Giftcard and mailed it to the winner with a handwritten note. We all received a personal thank you from the girl who won. Further proving that she was a real person, there was no money being stole, and just girls wanting to gain authentic followers while giving their following a chance to win something nice.

Well people, lets fast forward to GD 2018.. lol. Bloggers all over the internet are gaining 10k-50k followers in ONE loop. That is INSANE. To break it down further – no – these are not real followings. They are the giveaway hosts spending the money that the girls participating in gave them (generally $300-$600) to buy bots/fake accounts and sending them to their accounts to follow. All the while influencers are doing this behind the scenes and their REAL/AUTHENTIC followers having no idea of it via “secret” or “hidden” giveaways. If you haven’t heard of these basically what these are, are when bloggers pay “sponsors” (girls with around 1-2 million followers) that generally have gained that following through over 75-100 loops in their Instagram lifetimes. Or sometimes you will be lucky enough to get the occasional Heidi Pratt or Jenelle Evans (Teen Mom alumni) to “sponsor”. Anyway – they will post the giveaway to their accounts and tell their followings they need to follow everyone on @LoopGiveawayBestiesForever1234568728738 which usually contains 50-60 accounts. So to sum it up briefly, that’s how hidden/secret giveaways work and it is easy to spot when bloggers have participated in these (even tho they are “hidden”) (BRANDS OUT THERE THIS IS FOR YOU) because influencers who generally clock around 50-80 comments all the sudden have over 400-500 comments per post, usually with comments such as LINDA, GRGEOUS, Siexy. All spelled wrong because you know you can’t count on the robots to have spell check. Overall, we just really hope these loops will stop, plain and simple. They aren’t fair to anyone; The brands that pay for authentic followings, other influencers in the space and most importantly the genuine followers.

Okay so that rant is now over. To bring it back down to earth the reason why we are even writing this is to one say that not all LOOPS are bad like the above. We have done loops before, so we are trying to help bloggers/influencers/readers out there understand which are real and which are fake. We all make mistakes in accidentally entering a SCAM loop which is what I will talk through further below which ultimately inspired us to write this post.

So to begin again.. Lets talk about the SCAM loop we participated in. Loops are something that also have just came back to the forefront. We haven’t participated in one in a long time and you know what yea.. our following is moving at glacial pace but whatever. There are times you can’t help but to feel that you are falling behind. You start feeling the pressure because girls that started blogging like a year ago are now pulling crazy #’s and you feel that you have to keep up, and everyone is doing it… right? So we paid $150 and waited for results.. well no results came. I couldn’t believe it. No new followers and the host would give no answers, she would also threaten anyone that spoke up in the WhatsApp group that she would remove them from the group without reimbursement. So we kept waiting – nothing happened. Then came the announcement of the winner.. LOL. See screen shot below of the account that was chosen for a $2,000 gift card to Nordstrom. This was clearly a fake account. I voiced my concerns and the host was not having it, she said no one else had a problem with this winner so why believe me? I was so confused. Do these other girls that participate in these loops not even care who the winners are? They just want to gain followers and leave the rest? What happened to why these even began in the first place?? 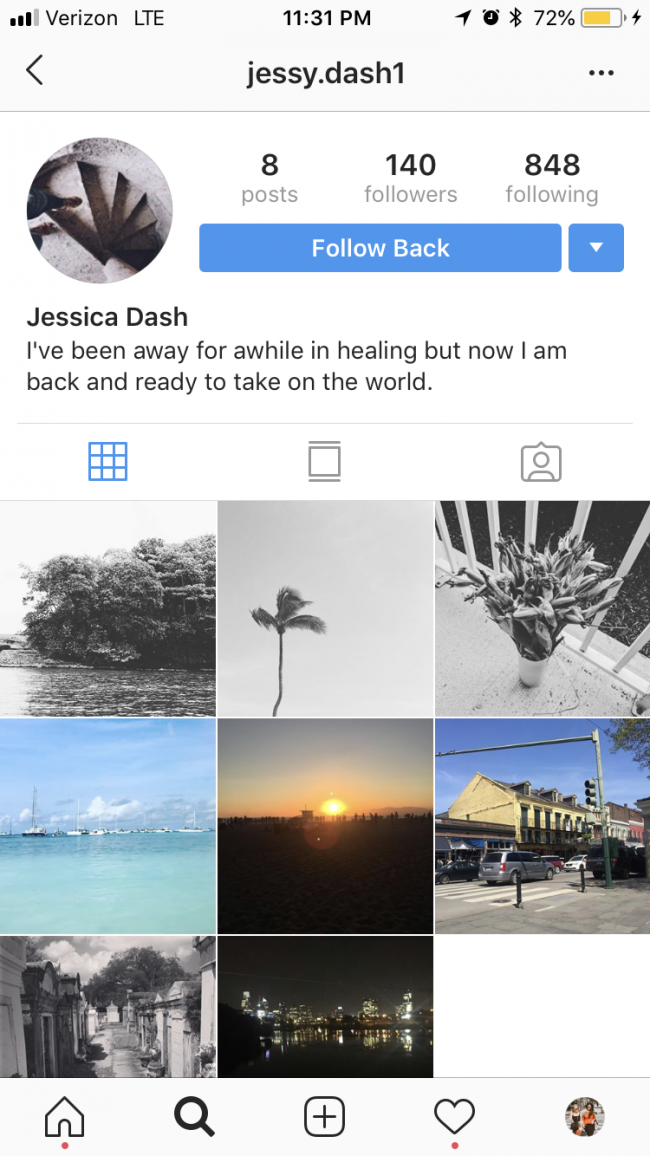 So I really thought about dropping it – but no. This was not fair to our real followers that actually entered and this was not morally okay. I knew at that point this was happening every day all over the internet. (!!!) So my first thought was that the host created a fake account and made herself the winner to keep all the money (I’ve heard this happen before). Then after speaking at lengths to her, I realized she actually did not have anything to do with it and she truly felt bad. She kept pressing me for proof that this account was fake (further than just having 8 followers….umm okay). So I looked in my comments and this is exactly what I found. The first photo shows her comment as one account name and my comment back to her as another account name? When I clicked on the username that I commented back to.. the account was just gone. Second Photo. I couldn’t believe it. This crazy person was creating probably 100’s of accounts to win giveaways all over the internet.  No bloggers (at least in my giveaway) seemed to care that the whole thing seemed to be a scam.

Ultimately – the host did the right thing and picked another winner. 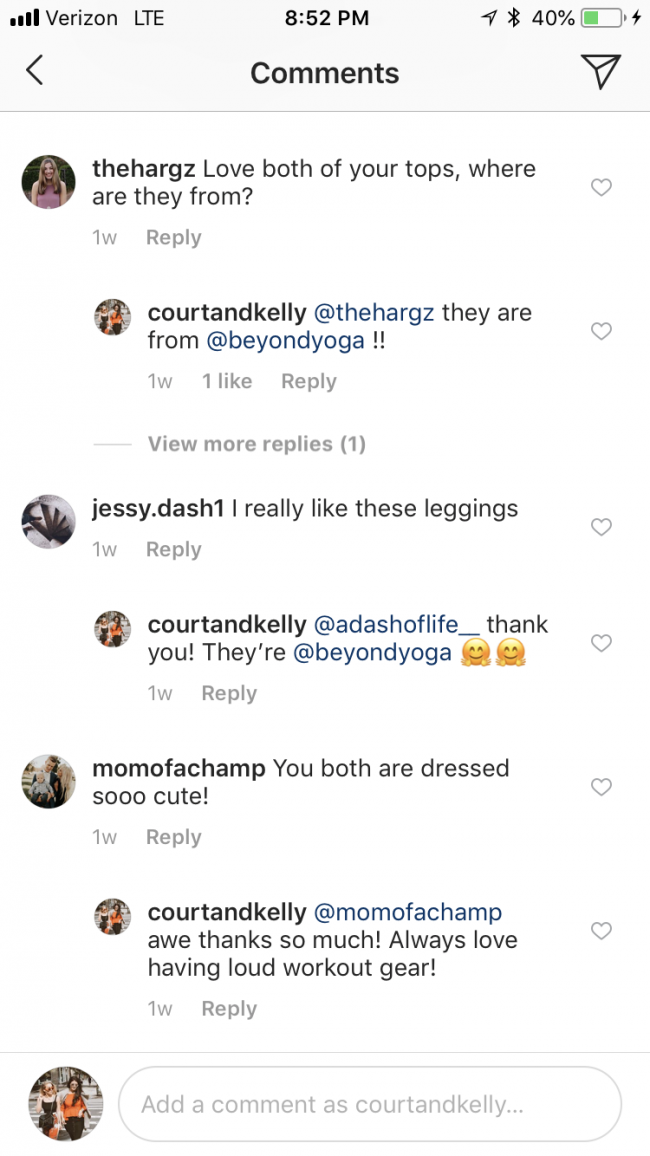 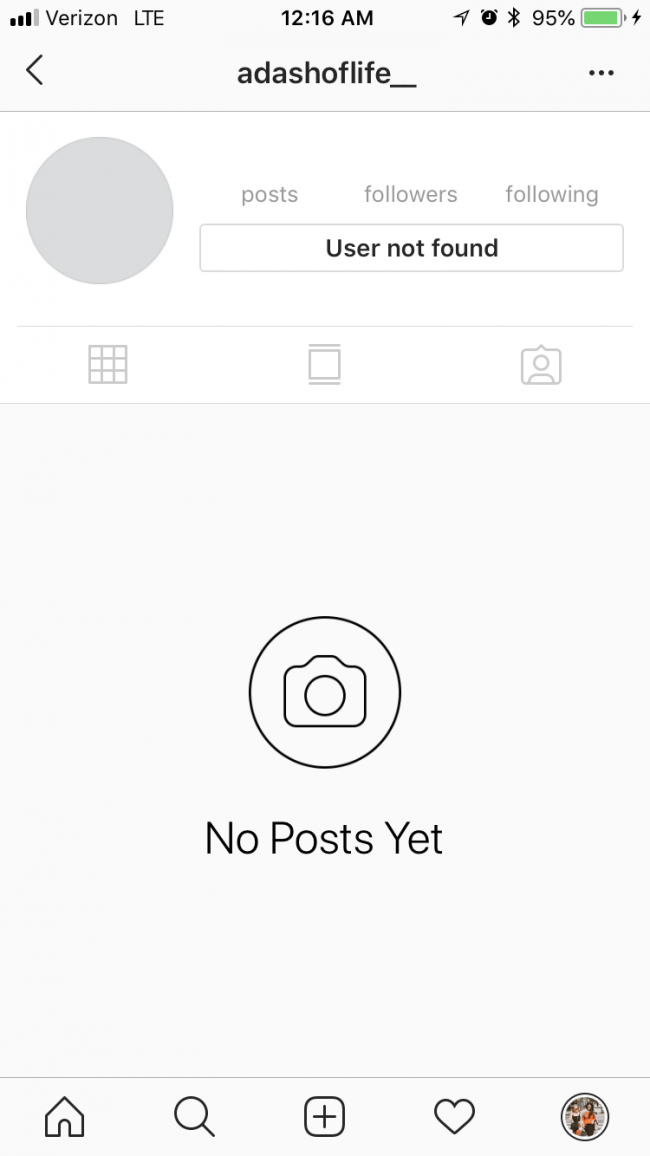 I could’ve stopped there but I didn’t want to. I wanted to write the real story behind loops and hope that influencers & our readers stop falling for them. I reached out via Instagram Stories to ask for other influencers to please provide names/accounts of girls that run REAL loop giveaways. So our friends and influencer friends all over the world know where to and where not to put their money. See below for what we have compiled.

First Example: Any loop giveaways that contain a small group of reputable bloggers. Photo below for example. This means there is no @travelgiveaways982392893 or @nordstromgiveawaysforever to follow AKA: NO MIDDLE MAN!! These are safe secure and something that you can trust, definitely the only way we will be participating go forward. 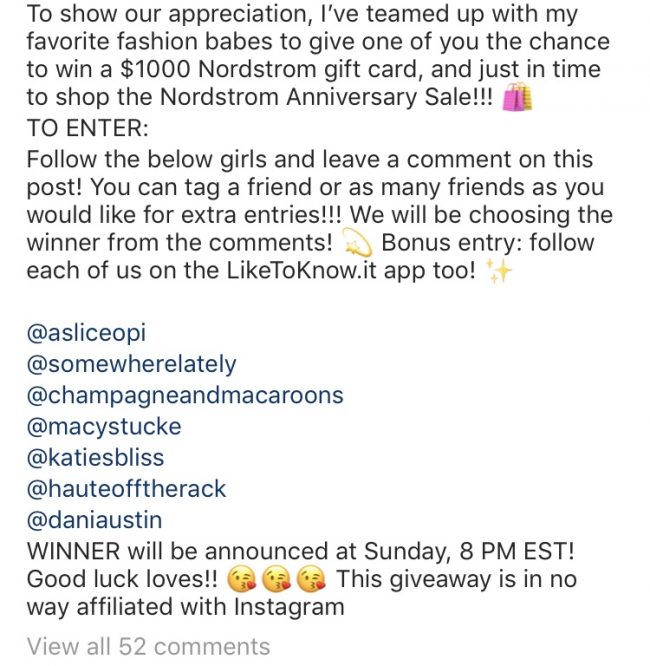 Examples of Host Accounts You Can Trust: @HelloItsLoh, @Andiytj, @Alicia_SF. These were the only rec’s we received. Unfortunately a lot of our followers just messaged us with horror stories about hosts or hosts that are making a living off of running these. Wish we had more info here =/

**We received ZERO recommendations of accounts that usernames look like this.. @loopgiveways @travelgiveways @nordstromgiveways that are real. So in our opinion it is probably best to stay away from those.

Honestly we believe it is best to stick with giveaways that you run with your friends. No sponsors, no bullshit. We were really hoping to pull together a bigger list but unfortunately, we aren’t sure how much realness is really out there.

SO – if you have made it to the end we applaud you – as this is the conclusion to our long winded opinion piece. We would love for you all to sound off in the comments below our DM us on Instagram. Our goal always with diary pieces is to open up a conversation about the ever changing social media industry.